Does a Wave Pool Surf Culture Exist? | The Inertia 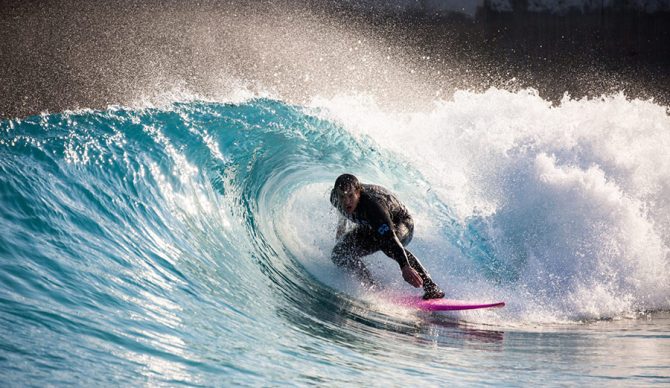 Post surf, beer in hand, my wife and I are watching my new-to-surfing kids, 9 and 11, riding waves at The Wave Bristol. Of the 400 waves the Wavegarden’s  modular electromechanical system had provided in an hour, they’d stood up on around 15 each. It had cost me roughly $160, and I was doing an internal balance sheet of the financial liability verses the obvious kids-smiles-on-dials asset. Was this, “The Ultimate surfing experience,” as advertised on the site? Every minute or so however, our view would be obscured.

“Just what are the grown men doing on those long skateboards,” interjected my non-surfing wife. “And why are they gyrating like Spider from School of Rock?” Spider, you may remember was the sinewy, snake-hipped character who replaced Jack Black’s Dewey as a guitarist in his band.

Now, these men weren’t wearing leather jackets which only consisted of the sleeves and collar but were punters doing reps of the pool’s flat pavement on longboards. They were mostly aged 30 to 45; white, muscular of deportment, postures of preening peacocks, giving the whiff of men who had turned up for the day in an Audi Quattro.

Her next question, the more pertinent one, was, “Does this happen at the beach?” Or to paraphrase, is there such a thing as wave pool surf culture? And was this it? With current wave pools operating from Seoul to Switzerland, Bristol to Brazil, and Texas to Tullamarine, there’s a new way of surfing. What is it? Why is it? Is localism dead? Is the equal allocation of waves, and the positive vibes that come with it a utopia, or a watered-down dystopia? How does existing surf culture fit in? And where will it take the sport?

That was a lot of questions. My wife had stopped listening after I mentioned Seoul. She was looking at her phone. “Did you know the actor who played Spider is now a Texas District Attorney?” she asked. “Who doesn’t?” Seemed the obvious response.

Now wave pools aren’t new. The 19th Century Bavarian King “Mad” Ludwig II electrified one of his private lakes in Neuschwanstein Castle to create artificial waves. And you wonder why he ended up 14 million marks in debt.

In the 1930s a public swimming pool in Wembley, London created ripples similar to the ocean’s flowing motion. A quantum-esque leap took us to 1985 in Allentown, Pennsylvania, where the Inland Surfing Championships was the first professional surfing event to be held in a pool. Wave pools in Malaysia, Tenerife, and the UAE all opened in the next ten years, using hydraulic pumps to create just-about-surfable waves.

In 2005, José Manuel Odriozola and Karin Frisch built their first Wavegarden prototype in the Spanish Basque Country. A decade later Kelly Slater dropped a clip of himself riding his first wave at the Surf Ranch. “This is the best man-made wave ever built, without a doubt,” he said in the clip which broke the surfing section of the internet.

In 2018, BSR brought its air gun to the wave pool arms race with a pool in Waco, Texas. That had 24, 10-foot-wide air chambers fired in unique sequences to produce up to 180 waves per hour.

Wavegarden, however, remains the world’s biggest commercial player with public pools in Wales, Bristol, Melbourne, Switzerland, Brazil, and Seoul, and another 30-plus projects in development across five continents.

The point is that it’s only that in the last few years wave pools have become a place where surfers; beginner, intermediate, and expert, have gathered. The culture, if there is one, is nascent.

Now surf culture is hard to define in any case, but two of its most primitive and intertwined base notes are lineup etiquette and localism. In the pools, both have been neutered.

Unlike in the ocean, getting a wave doesn’t revolve around the usual lineup variables; your ability, how aggressive you are, how big your board is, whether you have testicles or not or if you grew up there. Everyone has paid the same coin to surf, so everyone gets the same opportunity.

Of course, you have to have the coin. Poor surfers, and their kids, are locked out of the transaction. That will change the demographics and dynamics of the culture. For all the talk of diversity and attracting new urban or minority groups to the sport, the price of entry remains the biggest barrier to entry. The Wave sits adjacent to Bristol, one of the UK’s most diverse cities, yet the lack of BAME surfers is all too obvious. In Switzerland, an hour session starts at $115. The Sao Paulo pool in Brazil is private, being included as part of a upmarket residential development.

However, for surfers that can afford it, as more and more fill these pools it will be interesting to see whether this new level-playing-field lineup will infiltrate the one in the ocean. Are we on the precipice of a new, kinder, fairer, surfing world order? Or will the survival of the fittest eventually take hold in the tubs?

“I think the old school lineup, best shown recently by ‘The Angriest Man in Surfing,’ is no longer fit for purpose or accepted,” says Matt Barr, whose Looking Sideways podcast delves into action sport culture. “Surfing is more popular than ever and there are so many new entry points for new surfers, of which wave pools are the most obvious and accessible. And these new surfers have little knowledge, and even less interest, in the established surfing order or culture.”

Switzerland might be an interesting test case. The pool in Alaia Bay sits in the Swiss Alps town of Sion, 1,000 meters above sea level. The pool is alongside an action sports center with skateboarding, BMX, parkour, freeskiing, and snowboarding facilities.

“I’ve noticed the punters are much more helpful in the water. More experienced surfers will help those struggling with technique or positioning, especially compared to a Hossegor ripbowl,” says French-based shaper Christiaan Bradley, who makes boards for Alaia Bay and does regular onsite shaping tutorials. “They aren’t interested in the roots of the sport, or what pros are doing what. They are just about having a fun experience and getting their wave count up. Like most surfers.”

The Swiss pool has become a melting of the tribes; snowboarders from Germany, skaters from Austria, and Scandi surfers cross-pollinate in an action sports soup or given the water temps, a GoPro gazpacho.

Nineties pro skater Elissa Steamer once said the difference between surf and skate culture was that, “surfing wants fewer people and skating wants more.” In the pools, that difference is eliminated. The wave pools need to attract numbers to survive, and they’ll need non-surfers to make that happen.

“It’s a more inclusive and positive environment,” says Tin Popovich, a Croatian digital nomad who caught the surf bug living in Ericeira whilst working for a Scandinavian luggage brand. “In Portugal, often there’s some heavy localism and a macho, hostile culture. Of course, nothing beats surfing in the ocean but the pools offer better vibes.”

Mind you, in the future as the wave pool surfers hit the ocean’s lineups there’s every chance they will be very unprepared. They may have learned the technical aspects of riding waves, but the chaotic nature, the crowds, and the lineup hierarchy will be impossible to navigate. It will be fascinating to see if the salt and chlorine waters will ever mix.

Even Kelly Slater himself admitted having some Frankenstein-style concerns after the Surf Ranch. “I wondered if I’d made a surfing version of a nuclear bomb,” he told the Washington Post. Now we just wait and see if things explode.